You Are Here:
Home
/
How embracing fear can help create better design

It might seem a little dramatic to start talking about fear in relation to design studios. After all, most are fairly comfortable, engaging and enriching spaces. And yet, fear can reach its tentacles into the workplace in surprisingly subtle and insidious ways. Whether it be a fear of looking stupid, a fear of someone else nicking your ideas or a fear of your work just not being good enough: all of these anxieties can affect the culture of a company, or in the case of a design studio, the kind of work it might produce.

Accept & Proceed decided to explore how these fears play out in its own studio after founder David Johnston met writer and coach Hilary Gallo, who has been exploring the subject of fear over the past few years, and has recently released a book on the subject, Fear Hack. Gallo came to A&P to do a workshop, and the studio, in turn, then ran their own Fear Hack workshop, which, somewhat by chance, resulted in a piece of design, in the form of a cover for Gallo’s book.

“It didn’t start as a book cover project at all,” explains Johnston. “It actually started as a discussion generally around fear in design. Because he’d been thinking about fear in terms of negotiation and business, but what I’m really interested in, obviously, is the environment of design and building a positive work environment for my designers.

“When I was listening to him and his career, I thought of what a rocky road the life of a designer can be. Because as a junior designer I remember the fear that was involved in that first job, and the realisation that you’re actually asking for validation through your output. [It made me think about] whether that’s a positive or negative thing for the design process and building a design studio generally, or creating work that’s fit for purpose for your clients. I think all of that is bound up in fear as either a driver but also potentially a limiter of the design industry.”

As part of the Fear Hack workshop, Accept & Proceed examined a number of ways that fear can impact their work. This included experiencing physical fear – as you can see in the accompanying pictures here, some hanging upside down took place – and how to focus and overcome that, as well as the fear of losing control. 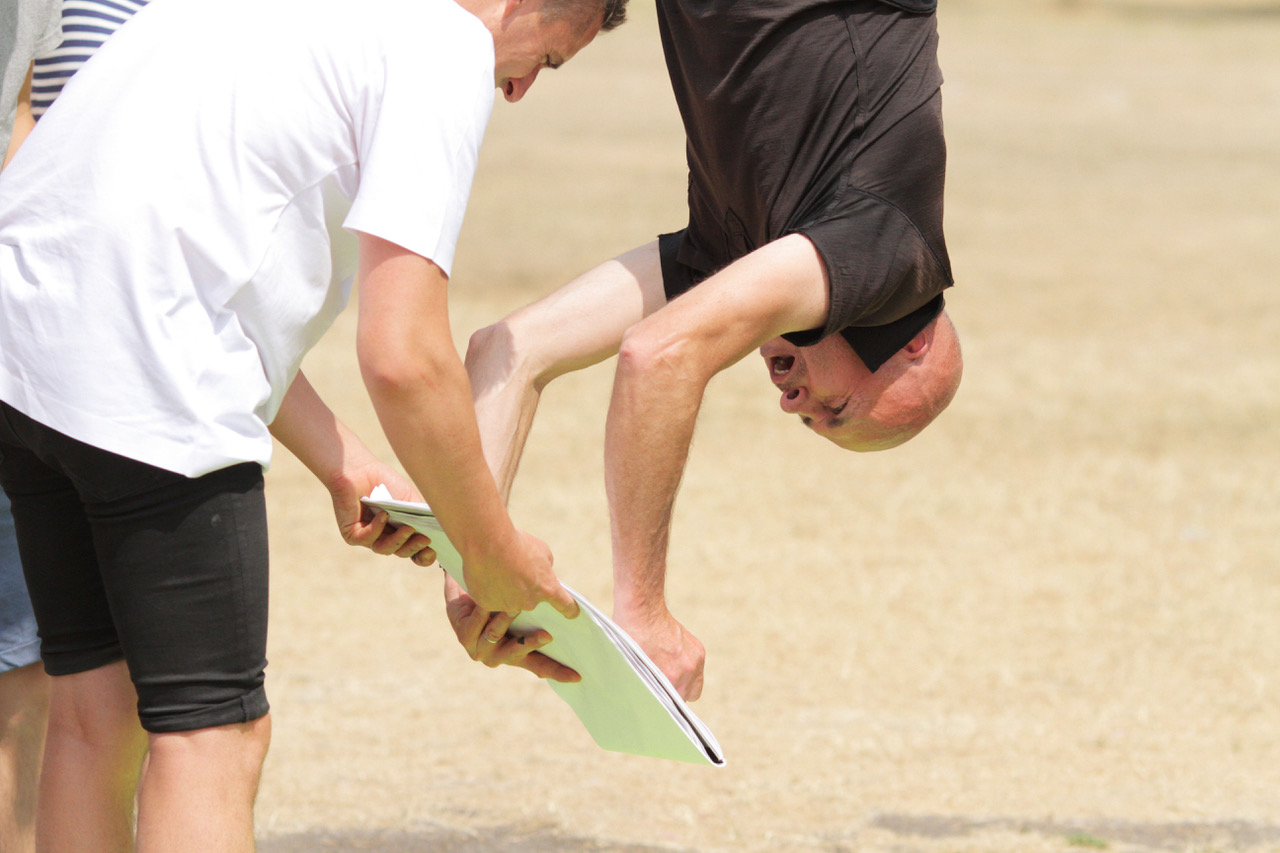 “Often we work in an iterative or collaborative way where one person has to start a piece and another person will add to it or guide it along. But one of the activities we went through was completely removing all ownership through the process – so much so that you didn’t actually know what you were creating,” Johnston explains.

“Nigel [Cottier], one of our design directors, created a really cool process where at the start you were just given a series of shapes and asked to compose them on a page with no specific rationale. I was very proud of the thing that I’d created but unbeknownst to me I had to give it away at phase two, for someone else to build on it.

“I can remember going ‘ahhh’, because I couldn’t help but feel a sense of ownership over it, but then I was given someone else’s and you build upon it. And slowly through the process of that workshop you realised you were creating typography. A whole alphabet was created by the end of it but with no participant knowing that’s where we were going with it. So the usual aesthetic judgement calls that are part of the daily life of a designer or creative director were removed completely. That’s a true collaboration. It’s interesting to play with the idea that you’re removing the ego completely to create work that’s truly fit for purpose.”

As well as being an enlightening exercise for Johnston and the team, this project also resulted in the cover for Gallo’s book Fear Hack, with the writer acknowledging the process that led to the cover design on the inside.

Johnston describes the creation of the cover as “a really fortuitous but unintentional outcome of that initial introduction I got to Hilary”, and stresses that the most rewarding things to come from the workshops were the ideas and renewed communication they prompted in his team.

“I think we’re talking more than ever as a team about design process and we’re working more collaboratively as an output of having done that workshop,” he says.

“We’ve levelled the playing field of the studio somewhat,” he concludes. “Because we took part in this workshop that did just that, it took away any hierarchy … and I think we realised that we’re a team, we’re working collaboratively and each person’s input is as relevant and valid and necessary as the others.”